I constantly hear the president blaming the Bush tax cuts (and everything else besides his own actions) for our current deficits today. Is there any truth to that? The media will have you believe that the Bush tax cuts were mostly for the wealthy and that because of them, the rich aren’t paying their fair share. That sounds plausible, doesn’t it? Let’s examine a few facts first. 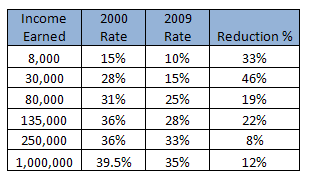 You should be able see from this table that the tax cuts weren’t just for the rich, they were for almost everyone. In fact, those making under $34,000 had the largest reductions percentage-wise.

What was the purpose of the tax cuts anyway? The idea was that in 2000, the government had overtaxed Americans. In that year, the IRS collected more taxes than the government actually spent. What? How did that happen with a democrat (Clinton) in the white house? Aren’t democrats supposed to be big spenders? Well, I’d argue that the reason we had a surplus was two-fold. First, the republicans took control of the US House of Representative for the first time since 1953, which, in my opinion, curtailed spending growth. Second, and more importantly, income tax revenues were at an all time high due largely to the internet bubble of the late 1990’s. The economic impact of the Internet was tremendous. It created thousands of new companies and jobs, provided new markets for others, and gave individuals easier access to investment (online stock brokers), which flooded capital into the markets causing stocks to soar.

Much debate was given over what to do with the tax surplus for 2000. Bush and most republicans decided that since the tax money came from taxpayers in the first place, then they would give it back to them by gradually lowering the tax rates such that future tax collections would be on par with spending.

It was a sound plan, despite the controversy. But then a few unexpected things happened, which were not related to the tax cuts at all. The dot-com bubble burst. The investment fury into new technology companies lead to overvalued stock prices which ultimately collapsed. Many companies and investors went broke. The Nasdaq fell from a record high of $5,132 in March 2000 to just $1,720 a year later. Even today, the Nasdaq still hasn’t recovered at only $2,800.

As if the dot com bubble bursting wasn’t enough, something else happened. American was attacked on September 11, 2001. This also had a devastating impact on our economy. Ten days after the attack, the Dow Jones Industrial Average hit a 12 year low at $8,235 on September 21, 2001.

Ok, so our income tax collections were hit by three major factors in the first few years of the Bush term: the lower tax rates, the internet bubble, and the 9/11 attacks. In fact, with the economy slumping, the Bush tax cuts were accelerated. Originally, they were supposed to the phased in over a longer period but were enacted in full in 2003 due to the downturn in the economy. Why? Well, the idea behind this strategy is highly debated. As I understand it, the philosophy was that a lower tax burden would encourage businesses to invest (instead of paying higher taxes) and individuals would have more money to spend, thus creating more economic activity. In short, the result was to be more people paying tax on higher incomes, thus offsetting the reduced rates. If this were true, then our government would receive more tax, not less. 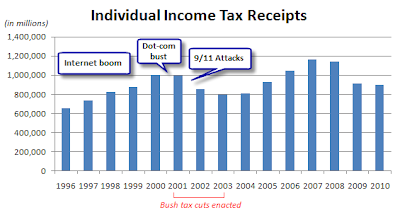 Did the Bush tax cuts favor the rich? If that was true, then wouldn’t it be fair to say that the rich are paying less now than they did before the tax cuts?

In 2000, the US population was 281,421,906. According to the IRS, only 37.4% of those people actually paid any income taxes at all. That’s right, 62.6% of all Americans didn’t pay ANY income taxes…zero. Of course, this number includes children, but still. So what about the 105 million people who did pay? Let’s call the top 1% of earners the “super-rich” as Obama likes to say. There were about 1 million people in this category, which was only about 0.37% of the total population. That group paid a whopping 1/3 of the total income taxes reported that year.

If you expand that group to the top 5%, let’s just call them “rich”. Now we’re talking about 2% of the total population. This group paid about half of the total taxes reported. That’s leaves the other 95% of taxpayers to pay the rest.

Now let’s look at the lower earners, say the bottom 50% of taxpayers. This accounted for about 81% of the total US population. This huge group only paid less than 8% of the total tax bill.

Ok, so that was in 2000. What about 2008, after the Bush tax cuts were in full effect? If these were so skewed towards rich people, shouldn’t these numbers be drastically different? 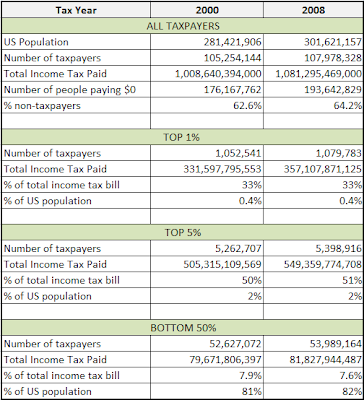 Ok, so if the tax cuts aren’t to blame for the current deficits, what is? Well, something rather significant happened in 2008 (besides electing Obama). The nation had been experiencing a housing boom. By 2006, the average price of a home was more than double (124%) the price it was just ten years earlier. The cause of this boom is also controversial. Interest rates being too low, banks lending to risky borrowers with little or no down payment, and increased foreign investments are just some of the common causes being thrown about today. However, the eventual bust of this housing bubble has a much clearer culprit – defaults.

As the Federal Reserve Bank raised interest rates, people with adjustable mortgages could no longer afford their mortgage payments (if they could even afford them in the first place). Home foreclosures began to increase. This led to fewer buyers and more homes on the market, which caused home prices to drop. As folks witnessed their home equity dry up, many even became “under water,” which means home owners owed more on their home than it was worth. This triggered an even greater number of defaults and foreclosures, perpetuating the problem. With all of the foreclosures going on, lenders were in a panic. The falling home prices meant that their collateral for the loans no longer covered their risk. Credit markets froze. Banks stopped lending. This affected not only the housing market but everything else. Business couldn’t borrow money to expand or make capital improvements. Individual couldn’t borrow to buy new cars or make home improvements. Credit card rates skyrocketed. It was an economic Armageddon.

Get the picture? The crisis led to TARP (government loans to bail out the banks), and provided an excuse for the incoming president to open up the spending gates. After spending $787 billion in a “stimulus” package the first month in office, Obama and the democrat-led house and senate felt that our only solution was to pump loads of money into the economy with more bailouts, government rebates for buying new cars and houses, more government jobs (i.e. bigger government) and health care. All the while, blaming Bush and the republicans for letting it happen.

I’ll save my analysis of why this happened and who’s to blame for another post. But as a result, the stock market crashed. The Dow hit bottom at $6,626 in March of 2009, losing half of its value in less than 10 months. Investments soured, retirement savings vanished, and jobs were lost. The unemployment rate went from 4.5% in April 2008 to a high of 10% by January 2010 and has remained above 9% ever since. This is why our tax revenue dropped after 2008. Fewer people were working. 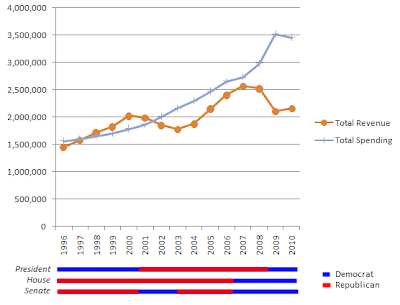 Source: Table 1.1, Historical Tables, FY2012 Budget
http://www.whitehouse.gov/sites/default/files/omb/budget/fy2012/assets/hist.pdf
The real reason that we have huge deficits every year is because of spending. We spend too much. This is not a partisan problem; it has happened under both parties. Some may like to take credit for deficit reduction initiatives, but the guilty ones have both D’s and R’s after their names. 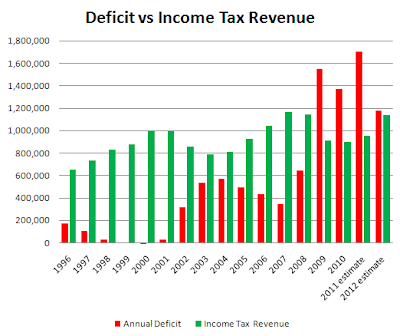 Source: Tables 1.1 & 2.1, Historical Tables, FY2012 Budget
http://www.whitehouse.gov/sites/default/files/omb/budget/fy2012/assets/hist.pdf
The chart above shows our total individual income tax receipts (the green bars) compared to how much MORE money we borrowed (deficit) that same year (the red bars). As you can see, we have been borrowing more than we collected in income tax since 2009. That means that if ALL of the individual income tax rates were doubled (for everybody) to 20%, 30%, 50%, 56%, 66% and 70%, it STILL wouldn’t be enough to cover the deficit! And that’s assuming that those exorbitant rates wouldn’t crimple the economy any further (which they certainly would). In fact, the 2009 income rates would have to have been astronomical to cover our deficit that year (27%, 40%, 67%, 89%, 94%). Would you like to pay those rates? Would you like for your children or grandchildren to pay those rates? Because today’s deficits are simply future taxes.
The chart below shows an even more alarming view. Each bar represents the total amount of money that our federal government actually spent each year. The different colors within each bar show from where the government got the money. A portion of each budget came from several different taxes. The remaining amount (deficit) was borrowed which is shown in red. 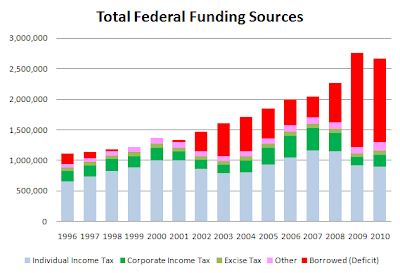 Source: Tables 1.1 & 2.1, Historical Tables, FY2012 Budget
http://www.whitehouse.gov/sites/default/files/omb/budget/fy2012/assets/hist.pdf
﻿
What are we spending all of this money on? Well, spending levels have increased in almost every category.  Have a look. 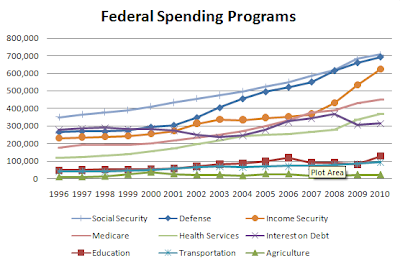 Source: Table 3.1, Historical Tables, FY2012 Budget
http://www.whitehouse.gov/sites/default/files/omb/budget/fy2012/assets/hist.pdf
Where has all of this gotten us? Deep in debt. Our current debt around $14.3 trillion and is bumping against the current debt ceiling. The debt ceiling is the statutory limit authorized by Congress. This chart shows our growing national debt over the past 15 years and the red lines indicate the past times that the debt ceiling was raised. The debt is growing out of control. 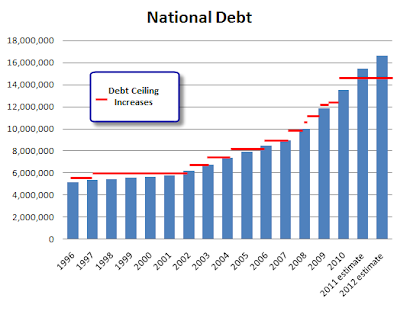 Source: Table 7.1, Historical Tables, FY2012 Budget
http://www.whitehouse.gov/sites/default/files/omb/budget/fy2012/assets/hist.pdf
http://en.wikipedia.org/wiki/United_States_public_debt#Debt_ceiling
Now the debate is whether or not we should raise the debt limit yet again. But why do we even have one at all? I mean, if everyone in Congress says that we absolutely MUST raise it this month – I ask, raise it to what? $15 trillion? 18 trillion? And when we borrow and spend our way to that limit, is the consensus going to be that we MUST raise it again to avoid a government default, world-wide financial chaos, and another depression? If the answer is always going to be that we MUST raise the debt limit whenever we reach it, then what in the World is the dang thing for? When does it stop?
Failing to raise the debt limit should not be viewed as an empty threat. That’s because world-wide collapse is not hinging on our default, but on our reckless fiscal policy. Once “tax and spend” liberals run out of our tax dollars, they become “borrow and spend” liberals. All of that borrowing is simply future taxes…taxes on our children. Where is the outrage on having trillion dollar deficits when all of the income tax paid in the U.S in a year is barely over a $1 trillion.
Raising the limit without meaningful fiscal reform only kicks the can down the road and digs the hole deeper for our children. Our generation allowed this to happen. It’s our generation that should face the consequences.
The World needs to know that we are serious about getting our fiscal house in order. We’ve gone a 10 year bender, and now we are surprised that we’re broke and have a hangover. If Obama feels the need to apologize for America, then he should apologize for that! Let’s just hope we didn’t “drunk call” anyone.﻿