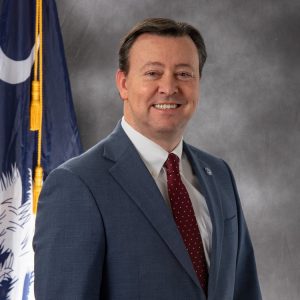 Drew McKissick was elected State Chairman of the South Carolina Republican Party in May of 2017. He is a Columbia, S.C. based conservative political strategist with over thirty years of experience in grassroots politics and a passion for teaching others how the system works and how to make a difference.

He’s a veteran of numerous political campaigns and conservative issue campaigns, and has specialized in political strategy planning and organization as well as the development of grassroots political education programs. He also worked as the Eastern Director for Faith Engagement for the Republican National Committee, helping engage the faith community towards greater voter registration and issue education.

He is a former member of the Republican National Committee, as well as the Electoral College (2004, 2012 & 2020), and has served in elected and appointed positions within the Republican Party at all levels and in all aspects of the GOP’s organization.

He has written several books and other publications dealing with various aspects of political education, organization, lobbying and campaigns which provide tips on effective conservative activism, (most recently: The Grassroots 101 Training Series and How to Plan a Winning Campaign).

He is a member of Congaree Baptist Church in Gadsden, SC. He and his wife Amy reside in Columbia, along with Jasper and Abby, their very willful Boykin Spaniels.

He likes Elvis and beating Democrats.