Good afternoon. I hope you had a wonderful Independence Day!

Last Friday, South Carolina Republicans once again took center stage nationally as U.S. Senator Rand Paul (R-KY) visited our state. We began the day with a fundraiser for the State Party in Greenville where we enjoyed lunch and a special one-on-one session with the Senator and about twenty very generous donors.

Following lunch, Senator Paul held a downtown news conference where he spoke with members of the state and national press. You can view some of his comments by clicking here. 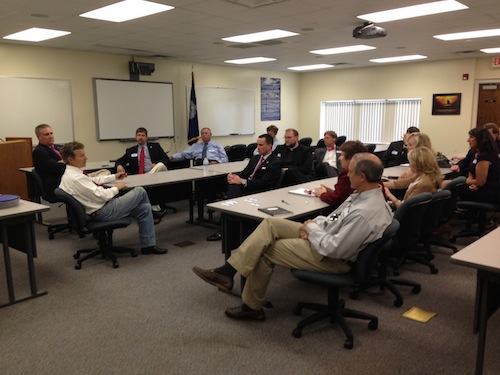 Next, I joined Senator Paul at a listening session with Republican Tea Party activists in Greer. Special thanks go to Karen Martin for her help in organizing our discussion. We then traveled to downtown Columbia where we met with more Republican Tea Party activists. Thank you to Dr. Mike Vasovski of Aiken and Allen Olson of Columbia for helping to organize the event. In both sessions, Senator Paul was able to answer questions and discuss some of our nation’s toughest challenges.

Senator Paul and I ended the day in West Columbia at our SCGOP Summer Barbecue where we greeted attendees at the new State Farmer’s Market. Such a great day would not have been possible without the numerous supporters and volunteers gathered from across the state. Thank you all! I’d like to especially thank State Agriculture Commissioner Hugh Weathers for his assitance in holding the event at the State Farmer’s Market.

We were pleased to be joined at the barbecue by Rep. Joe Wilson, Rep. Mick Mulvaney, Treasurer Curtis Loftis, and over two hundred other guests who listened to Senator Paul deliver a speech focusing on his views on national security and how to create a bigger Republican Party. If you were not able to attend, please click here to watch C-SPAN’s coverage of the event.

On Saturday evening, Meg and I enjoyed traveling to Summerville for the 2013 Dorchester County Republican Party Pig Pickin’. It was my honor to introduce Rep. Mark Sanford and visit with representatives from Senator Lindsey Graham‘s office. It was also great to see State Senator Sean Bennett, county Treasurer Mary Pearson, and so many great Republican friends!

Thank you Chairman Jordan Bryngelson and Executive Committeeman Tony Piscatella for being such great hosts! (photo at left)

In case you missed it, please click here to read my Independence Day message. As we continue to celebrate our nation’s birth, I hope you have a blessed and safe weekend!

Thank you so much for your help in advancing freedom here in South Carolina and for the example you set for the rest of our nation.